One of the major fears and concerns that most of us hear about, especially in the past 10 years, is the danger of Vaisnava-aparadha. Any aspiring Vaisnava fears offenses towards devotees as they are detrimental to one’s spiritual progress. However, not knowing what “offensive behavior” means is dangerous. Why? Because that may end up being detrimental to our spiritual progress as well. For example, maintaining a healthy distance from “devotee-pretenders” can be seen as “offensive”, yet it is very much encouraged by Haridasa Thakura.

If you confidentially inquire any senior devotee, they will tell you that just because somebody is wearing kanthi-malas and tilaka for many-many years doesn’t mean you have to place all of your faith and trust in them and listen to them with your heart wide open.

Hari-Nama-Cintamani elaborates on this subject beautifully, and for the purpose of not pointing fingers at anybody (as we may even recognize ourselves), let us just discuss the matter hypothetically.

1. Suppose some people claim to be devotees (even for many years and with thousands of followers), but they induce us to disrespect great devotees & sadhus.

Because association with those who are not devotees is bound to produce disrespect for devotees (sadhu-ninda), the devotee is careful to avoid such association.

2. Suppose some people are externally Vaisnavas, but they induce us not to follow instructions of Sri Guru (by that I mean first of all Sri Krishna’s orders as the Original Guru, our previous acaryas, our param-guru Srila Prabhupada, and our immediate diksa & siksa gurus, as all of them are giving us the same instructions, isn’t it?)

Now these people may claim to be devotees, and may be accepted by the public as such, but if one rejects such people, it is not considered sadhu- ninda. Furthermore, one who criticizes a person who gives up these asat people should also be rejected and avoided. Therefore, the serious devotee who gives up asat-sanga, which causes sadhu-ninda, and exclusively takes shelter in the name, will certainly receive the treasure of prema.

3. Suppose some people are externally Vaisnavas, loudly and pompously presenting themselves as experienced devotees, yet their perception of their own level of bhakti is inadequate. Neither do they see your position in proper light. Hence the “helpful instructions” given by them only causes disservice (talking from personal experience here)

One should rather eagerly take the dust from the feet of a Vaishnava, regardless of whether he is a grihastha or sannyasi. One will treat him only according to his advancement as a Vaishnava, which is based upon his degree of attraction to the holy name. Such things as caste or asrama, wealth, learning, youthfulness, beauty, strength or number of followers are not factors.

Look at that, I especially love the number of followers. Somehow in the light of social media, it became a very popular criterion of devotional success nowadays. If one has a “crowd” behind him/her, then they are necessarily meant to be “heard & accepted as authority”. So in the above quote Haridasa Thakur establishes, in the chapter that defines Vaisnava aparadha, that we are supposed to treat devotees according to their degree of attraction to the Holy Names. If this sounds wonderful to you – get ready for the next one.

It can be seen that it is important for the practitioner of bhakti-whether a kanishtha or madhyama bhakta-to understand in his performance of sadhana, his own position in devotional service according to his internal purity.

By doing this one can avoid nondevotees (asat-sanga), and by this one can advance further. Therefore it is important that one come to the position of madhyama bhakta, one who is qualified to make these distinctions.

The typical activities of a real devotee (madhyama bhakta) are to avoid sadhu-ninda and to take association of sadhus, serve sadhus and give knowledge to the innocent jivas, while performing nama-sankirtana.

4. And finally, suppose some people, who claim to be devotees, encourage us to criticize Vaisnavas based on insubstantial grounds.

In conclusion, let us remember that while offending Vaisnavas we shall lose the taste for the holy names, but by offending sri-guru and shastras (under the influence of so-called “devotee association”) we shall block our progress in bhakti and bring ruination upon us.

By offending other Vaishnavas he loses the taste for the name and gradually falls under the control of wealth and women.

Consequently, if one disobeys or disrespects the guru, that is offensive, and will block one’s progress in bhakti.

If one takes the holy name along with these philosophies [anti-Vedic or pseudo-Vedic], one is committing serious offense to the name. One simply brings about one’s own end.

Therefore, let us wholeheartedly serve the feet of Vaisnavas, Sri Guru and Gouranga and chant the Holy Names! By carefully studying Srila Prabhupada’s books & books of previous acaryas we should learn how to seek out the association of Vaisnavas and thus, by their mercy, attain the most desired fruit of prema-bhakti.

When these six types of saranagati (full surrender) are not present in an individual, he possesses the intelligence of “I and mine”. Such a person is considered a low rascal because he believes that he is the doer, that the world is his, that he is the creator of his destiny and the enjoyer of the fruits of his activities, that he is his own protector and maintainer, that these are his wife, brothers, sons and daughters, and that by his own endeavor he can achieve all perfection and glory. Such people are proud of the power of their own knowledge. Not considering the Lord’s control, they think that by their own brain they can increase and extend the arts and sciences.

If these people hear the glories of the name, they do not believe them, or if they do chant Krishna’s name, it is only out of social custom. Being pretenders and cheaters, they may chant the name in hela-namabhasa, but will never get prema. This offense is due to being bound tightly by maya, and deliverance is very difficult,

However, one can see that there are some people who, taking up the name and reaching the level of suddha-bhakti, have completely given up material attachment and humbly worship Krishna’s lotus feet and sing His name.

One should seek out this type of person, take his association, and serve him with the desire to give up material attachment. Gradually one will become fixed in the name and “I and mine” will go away as one transcends attachment to maya. Giving up the false mentality, one will culture full surrender, which is the constitutional position of the jiva and the very nature of bhakti. By this one can get prema.

Kapila Muni is one of the twelve leading authorities in the Vedic tradition. His system of metaphysics and spiritual knowledge—Sankhya—forms an important part of India’s philosophical heritage. Teachings of Lord Kapila is based on a unique series of lectures presented in Mumbai, India, in the spring of 1974, by His Divine Grace A. C. Bhaktivedanta Swami Prabhupada. At the time of the Kapila lectures, Srila Prabhupada had just completed writing the section of the Srimad-Bhagavatam containing Kapila’s teachings. The lectures explain the verses in even greater detail, and were later transcribed and edited to create this book. Complete with original Sanskrit, translations, and purports, Teachings of Lord Kapila discusses the significance of the guru, the psychology of consciousness, the characteristics of a self-realized person, the science of meditation, the nature of transcendental knowledge, and the process of ultimate liberation from material existence. Link to the book: sravanamdiaries.com/teachings-of-lord-kapila/ 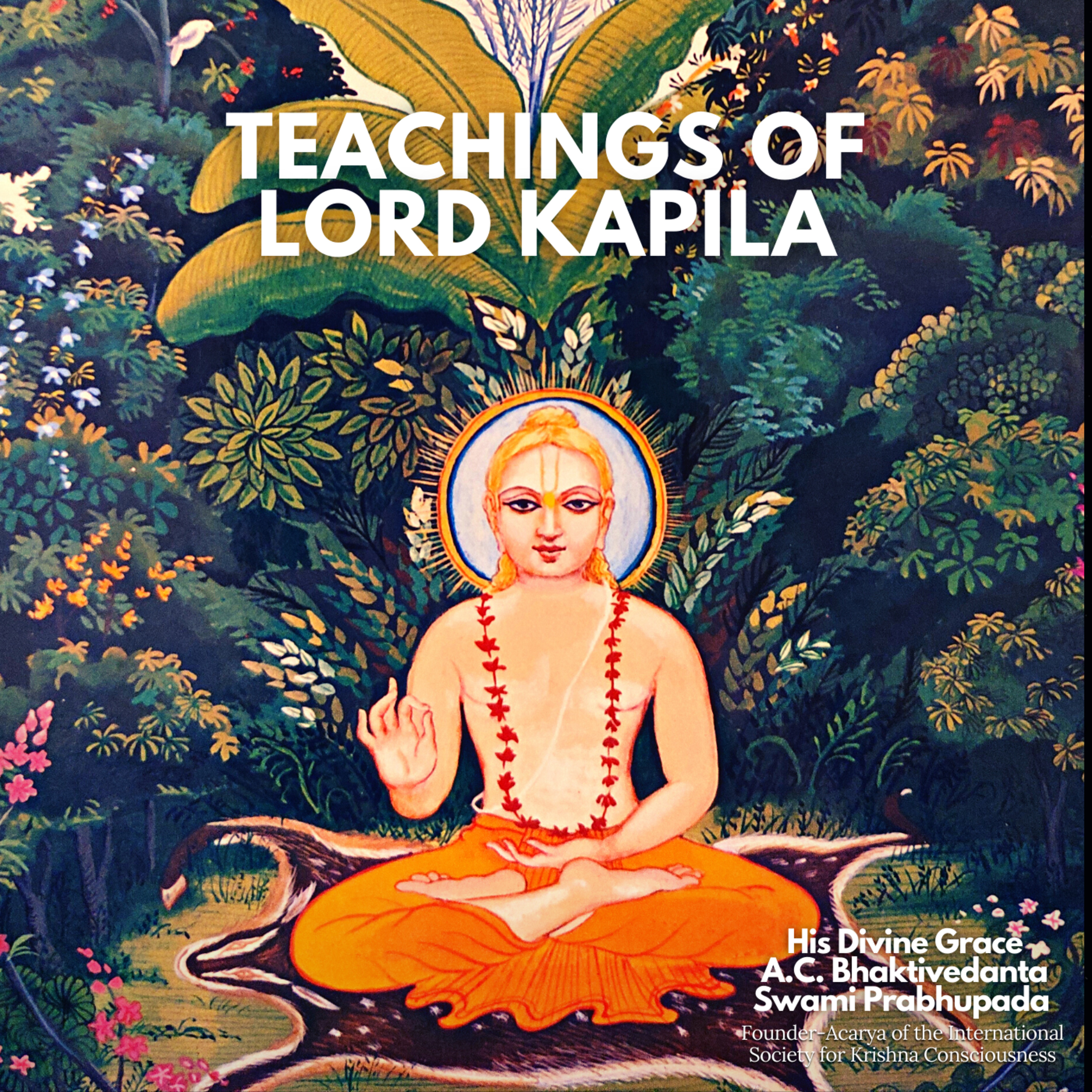